Single-window service for evaluation professionals in the Ottawa/Gatineau region 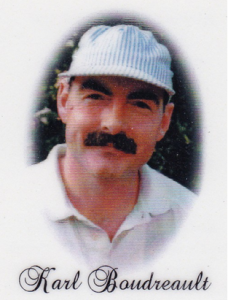 A Leadership Award was introduced to the NCC membership in 2003 and first awarded at the 2003 NCC Annual Conference. The NCC Board of Directors unanimously passed a motion at its May 2004 Board meeting to dedicate the award to Karl Boudreault, an active NCC member who had passed away in January 2004.

We lost Karl far too early at the age of 45. We honour his spirit and his passion for evaluation through this dedication of the Karl Boudreault Award for Leadership in Evaluation.

Karl worked in 8 different federal government departments in his 22 year career and the majority of his work life was spent in evaluation positions.

Karl sat on the NCC Board of Directors, as the Treasury Board representative while working at TBS from 1997 to 2002. Karl forged stronger links between our Chapter and TBS, notably in organizing joint professional development opportunities for the membership. He was dedicated to the notion of continuous learning.

But that is just the factual history. More important, is how and what he contributed to the evaluation community. For that we have to look at the man who he was.

“Free spirit and huge passion for life” – Jim Gilroy of GGI – is a pretty apt description.

This passion for life was also a passion for evaluation. Karl held strong opinions and liked nothing better than a good strong debate on concepts and issues. But he enjoyed the debate not for the sake of argument or to be right and persuasive in his position (although that was often the case) – but more for the opportunity to learn and to look at a situation or issue from a new point of view.  He was always delighted and energized when he was convinced of new point of view!

This passion would also present as controversial and Karl enjoyed, no reveled, in being controversial. Here again, Karl was rarely thinking ‘in-box’ – I am not sure he knew a box existed, which could prove challenging in the ‘political’ life of public service.

Karl was a strategic thinker, but quite pragmatic and very visual. Anyone who met with him in his office can attest to a heavy reliance on the white board, which always contained some diagram or model depicting a problem and a solution – with the mandatory arrows connecting the pieces of the puzzle. He and I solved many a problem with table napkins over lunch.

His vision for evaluation included greater recognition for the profession and its contributions, notably within government. He worked towards this vision and had little patience for evaluation work that ended up collecting dust on the shelf.  He believed this to be the responsibility of the evaluator and the evaluation community: To create an environment and undertake evaluation work in a manner, which led to useful and used results.

Karl defined success in evaluation, not in the results provided in reports, but as he said: “Indicators of success include, not only the implementation of recommendations, but the elimination of surprises for the client, as results are integrated into the organization, even before the publication of the final report.”  He considered examples of such collaborative efforts to be his greatest success as an evaluator. Humor was also high on the list of competencies Karl believed you needed in evaluation and in life.

Perhaps even more importantly, Karl actively mentored and coached those new to the profession. Sharing his knowledge, skill and experiences was second nature, something he did with great ease and competency.

Karl described his own management style, which he credited to his father, Gaston, as –  “my management is characterized by the provision of the maximum possible freedom and support to professionals and employees, the use of every success and error as a learning opportunity, and constant investment in the development of each team member,” – a quote I stole from his CV.

But instead of being the usual resume self-promotion rhetoric, this was truly how Karl operated in the business environment. Karl had no problem with delegation, as he did not fear error. Those who personally benefited from this kind of supportive and developmental management style, Aileen Pangilinan and Fabio Onesi for example, recall the beauty and the challenge of this freedom – of “being thrown in and completely allowed to run with it.”  You were really able to learn from doing, making mistakes and succeeding, with Karl not for him.

Karl’s starting premise and assumption was that regardless of position or level, you had something to contribute and something that he wanted to hear or know. He exemplified this by being what is often not given sufficient credit – a good listener.

He felt the strength of our profession was in bringing new people into the field, to keep us challenged and to continually insert fresh perspectives to the field. He truly enjoyed mentoring, coaching and sharing his experience.

Another part of his contribution to our community lies in this keen interest in sharing knowledge and his active network building. The relationships and connections he facilitated are many. Karl would often find commonalities between his circle of colleagues and friends and initiate new connections.

To this end, he was a very strong supporter of the Canadian Evaluation Society and was a member of both the National Capital and PEI Chapters. His focus within these Chapters was often on creating opportunities for those in the profession to learn, from each other and from more formal, organized training events. He introduced many to the Society.

Karl defined success in life through his relationship with his partner, Johanne and his three children, Marc-Antoine, Camille and Laurent – and through his strong ties with his father, Gaston and 3 sisters, Anne, Marie-Claude and Myriam as well as his many friends.

We are dedicating this award – The Karl Boudreault Award for Leadership in Evaluation – to recognize others who also demonstrate these skills, talents and characteristics. He is sorely missed!

Find out how you can help